Nicki was four years old when she received life-shaping encouragement from her dad after bringing home her first painting from pre-school.  The crinkly paper canvas was exactly as tall as she was with the added height of the easel.  With all the precision her hand could muster, she painted a number“4,” for her age.    Then she peppered the rest of the canvas with a happy smattering of shapes and brushstrokes until she knew it was done. “Teacher” then hurriedly whisked the painting away to dry outside.  In her haste, Teacher hung it upside-down, the watery paint drips, betraying the “4” into a backwards, lowercase “h” instead.

That night, Nicki’s Dad a self-taught realism painter examined the piece, and cheerfully lauded her efforts, saying what a natural eye for balance and color she had.  And he was sincere enough in this praise to surprise is daughter by having it professionally framed! Upside-down! Yes, upside-down that painting hung for 33 years thereafter, until her father passed away in 2013.  Today, Nicki’s paintings can be hung in any direction the viewer fancies.  She paints all sides of the canvas to its edge, so that framing is strictly optional.

Born in St. Petersburg Florida, Nicki graduated with a BFA in Motion Picture Television and Recording Arts from Florida State University Film Conservatory, and immediately left for Los Angeles to pursue work in the hustle and bustle of film and television production.

She worked in all aspects of production. Her most memorable gigs were Paramount Pictures, “The Truman Show,” Warner Bros, “The Matrix Reloaded,” “The Matrix Revolutions,” and “Enter the Matrix.”  20th Century Fox’s, “The Simpsons,” Sony Pictures, “Disturbia,” and “Eagle Eye,” and as Production Manager for “G4: Television for Gamers.”  Special Projects Manager for The Art Directors Guild IATSE Local 800, where she helped launch and manage its fine art gallery, Gallery 800.  After 15 years in California and a 6 month stay in Oahu, Hawaii, she followed her heart’s prompting to repay her debt of gratitude to her native land.

The Tampa Bay area skies, sunsets, waterways, beaches and luscious green trees are an endless flow of inspiration for Nicki’s paintings and nature photography.  Each piece reflects her deep love for all life and her internal striving for balance and freedom in the seen and unseen realms of existence.  Her work is abstract-impressionist with a with bold color palette. Imagination activation is the major intent of Nicki’s work.  She delights in the viewer’s child-like enthusiasm as they discover the hidden imagery.  “I see a dolphin! Ooh! And look! Do you see him? The turtle with a goatee surfing that wave?!”

Her paintings depict scenes from a universal, cosmic and eternal celebration. An always-inclusive (never exclusive) party in the sea, sky, space and all the dimensions in between!

For ideal activation of hidden imagery, it is recommended that Nicki’s paintings be viewed at least 4 feet distance, with a soft relaxed gaze.  ­­­­­­­Thank you for your participation, imagination and activation! 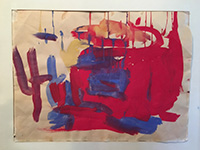 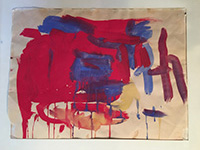